Let me just start out by saying; “It really works!”  I’m not saying I’m surprised that it works but honestly I am a little surprised at how well it works.

The GMAG is a saltwater powered battery charger.  It is a fuel cell that uses magnesium and salt water to create an electrical charge.  This little device not only looks like a typical battery charger and holds up to 6 rechargeable batteries but also about a half a cup of water, two teaspoons of salt, and on the back two magnesium “pucks” clip in.  The reaction between the salt water and magnesium creates an electrical charge enough to charge six 1.2v AA 2000 mAh batteries in about 6 hours.  I don’t know exactly how long it took me because I forgot about my experiment and let them charge overnight. 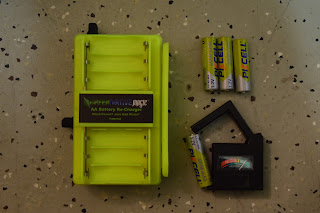 I discharged the rechargeable batteries that came with my unit down until they would no longer run an led flashlight.  The charge on each of the batteries was between .7 volts and 1 volt when I started charging them.  They came with a charge of about 1.25 volts.  A fully charged AA battery will have a charge of 1.35+ volts.

A battery tester like the one pictured above is a must have to go along with this product.  I actually recommend that you have a digital multi-meter.  First of all they are an essential tool for any prepared person but also you just can’t know or see that this simple battery charging device is working without one.

My first attempt at using the charger did not work properly.  I’m not sure why.  I used a pre-measured salt packet that came with the “Disaster Pack” that I received and followed the instructions filling the unit to the recommended level with tap water.  After a few hours I was only getting 1.05 volts reading on my meter.  This, of course, only charged the batteries up to 1.05 volts, which is still considered fully drained.  So I started over.  I rinsed out the unit and noticed very little “corrosion” on the GMAG magnesium pucks.  This time I added 2 teaspoons of sea salt from my cupboard instead of one of the pre-measured packets.  Within about 15 minutes I measured 1.19 volts, then 1.2v, 1.223v, and up to 1.345 volts about three hours later. 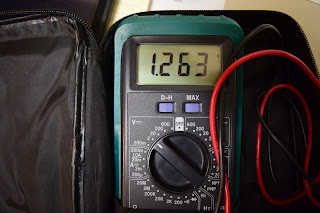 Then I went to bed and forgot about it.  By about 6:30 AM the next morning in a bit of a panic remembered what I had started the night before.  The batteries all had a charge of around 1.37 volts, which means the charge had reached at least that voltage.

“Wow!” is what I wrote down on my notes that morning.  Yes, I had left them in for more than twice as long as I should have, but the results were very positive.  The picture below is the result of the excessive time in the charger.  The magnesium pucks had worn down considerably.  On the left are the new pucks and on the right are the used pucks. 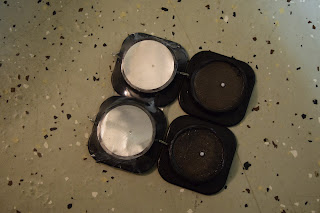 The manufacturer says that I should be able to charge these 2000 mAh batteries about 100 times before the magnesium is gone.  I’m sure I shortened the life of these considerably by letting them charge for two long.  When one set of pucks wears out then just insert another set and charge some more batteries.

Here is what I should have done, and will do the next time.  First of all, I won’t start so late in the day or I’ll time it right with when I wake up.  After the salt and water is mixed in the unit I’ll make sure that the voltage is rising nicely by checking with my meter, then wait the recommended time for the batteries to charge.  It should take about 2 hours for 2 – 2000 mAh batteries to charge, 4 hours for 4 AA, and 6 hours for six AA.  Then I’ll use my meter or tester to check the current battery charge.  If they are at 1.35 volts I’ll consider them fully charged.  At a minimum the batteries should be checked with a simple battery tester like the one in the photo above to make sure the charge is high in the “Good” range.

These testers are inexpensive so it’s a good idea to have a few of them if you don’t have a meter.  I check all of my batteries because when they no longer work in a particular device because their voltage is too low they will still work in other devices.  Also, many times I find that if there are two batteries in a device and one of them is too low to operate the other one still has plenty of charge.  I use the battery tester to match similarly charged used batteries and do not throw them away until they are below the LOW indicator on the tester.  You can save a lot of money on batteries this way.

After the batteries are fully charged, empty the solution and rinse out the unit.  Let it dry and then you can put it away.  The magnesium pucks have an indefinite storage life so whenever I need to charge batteries I can add salt water, put the pucks in the unit and charge some batteries.  Pretty darn cool if you ask me!

Some of the most important things we need to be adequately prepared require power.  Flashlights and radios are on the top of my list.  Typical AA batteries have a fairly long shelf life of about 10+ years.  Rotating them can be easy but what happens when you run out and are not able to get any more?

Yes solar works very well for charging batteries too.  Can you think of a situation when you need to charge batteries but don’t have adequate sunlight?  Ya, me too.  Having multiple ways to charge batteries and generate power is always a good idea.  Also, think of the weight savings between carrying 100 batteries or one GMAG battery charger, some salt, and 6 AA rechargeable batteries.

If you value my opinion I say that it’s a good idea to add one of these units and an extra set of the GMAG pucks to your preps.  Stick em on the shelf next to your food storage and Survival Medical first aid kits and they’ll be ready for you when needed.